Royals Welcome Abundance of Local Players to Team This Summer 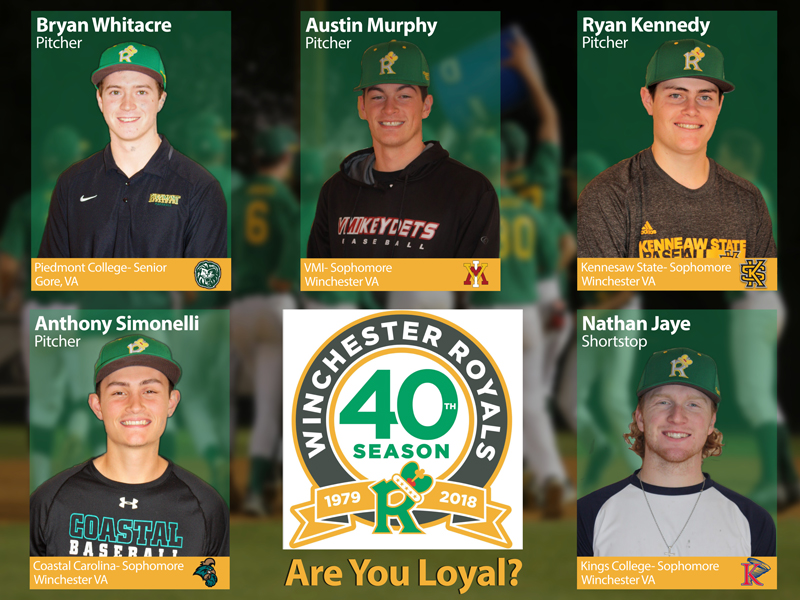 The Winchester Royals are set to have five players from the immediate area join the team this summer in their 40th season. A combination of graduates from James Wood High School and Millbrook High School, these talents are of some of the best players in all of Virginia.

They will now have the opportunity to compete on the same team for their hometown, and all of them have potential to be an integral part of the team.

Murphy is one of four Millbrook Class of 2017 graduates that will be with the Royals in the upcoming season. He is currently a freshman at VMI, preparing for his first season pitching for the Keydets.

“I feel pumped. I’m ready to go. I know it takes a lot to be a Division 1 athlete, especially at VMI. I’ve put my head down and I’m grinding,” said Murphy.

Murphy seemed even more excited to have the opportunity to play ball at home this summer with his high school teammates.

“When I first found out, I thought it was cool that we’re all gonna get back together. Just like old times. I feel like I need to work even harder because everyone back home wants to see you succeed.”

Prior to his senior year of high school, Murphy had only given up two earned runs for a 0.65 ERA, accumulating 18 strikeouts and allowing only eight hits in 21.1 innings pitched.

In his last season with the Pioneers, he only pitched 9.1 innings before enduring a season-ending injury. He gave up four runs, but struck out 16 and only walked three. Perfect Game USA ranked Murphy No. 28 overall and a top 10 pitcher in the state of Virginia for the Class of 2017.

Bryan Whitacre, Piedmont College Whitacre is making the transition from the Rockingham County Baseball League to the Valley League this summer.

“I think the transition will be good as far as the competitiveness of it. It will be a change but I do not think it will be too dramatic,” said Whitacre.

Through his freshman and sophomore seasons at Piedmont, he has compiled a 2.47 ERA and 37 strikeouts in over 29 innings pitched. A graduate of James Wood High School in 2015, he was excited to hear about the plethora of players from the Winchester area that will join him.

“It is good to see all of the athletic ability that has come out of the district as a whole. I am excited to see how they perform.”

Whitacre has some solid goals set for himself this summer.

“My goals are to help the team and build on my own athletic ability to in return help my college when I come back for my senior season.”

He will be a great veteran addition to the Royals and will definitely help bolster the pitching staff as the they set out for a VBL championship this season.

Simonelli is another pitcher from the Milbrook quartet that Winchester will feature this season. In his illustrious junior season with the Pioneers, he posted an 8-1 record with 71 strikeouts and 0.57 ERA in 49 innings pitched. He earned Pitcher of the Year honors for Conference 21 West and helped his team reach the Regional Semifinals.

He was not able to come back for his senior season, however, as he was diagnosed with a torn Ulnar Collateral Ligament (UCL). This required Tommy John Surgery and over a year of recovery time.

“To come back after not playing the spring season with [my high school teammates], I get to play with them in the summer. It’s a really cool accomplishment to come back and play for our hometown,” said Simonelli.

Despite the injury, he was still ranked the sixth best player in the entire state of Virginia and was a top 150 pitcher in the class of 2017 according to Perfect Game. Now fully recovered, Simonelli is anxious to pick up right where he left off at home with a solid freshman campaign for the Chanticleers.

At full strength, he has the potential to have a huge impact on the Royals success.

Jaye is the third Pioneer that will be representing the Royals this season as an infielder. He put together a dominant senior season at Millbrook, batting over .450 with double digit RBI and an OPS of 1.376. On the mound, he went 3-0 with a 0.91 ERA in over 15 innings pitched.

“I was fired up [when I found out]. It will be fun to play with the guys again and get to hang out to them. I am looking forward to it,” said Jaye.

He feels that he brings a great set of intangibles to the team that will translate to success this summer.

“A good attitude, great energy, and being a good teammate.”

Perfect Game ranked Jaye the 12th best shortstop in Virginia for the Class of 2017 due to his speedy yet powerful five foot, 10 inch frame. He is highly anticipating a successful freshman season at King University as well as a fulfilling summer ball experience with the Royals.

Last but not least, Kennedy rounds out Millbrook’s talented group of incoming players. He is another pitching standout that took over in a tremendous way for the Pioneers last spring as a result of Simonelli’s absence.

“I am super excited to be able to team up with [my high school teammates] again. We had a really good junior-senior campaign and now we are coming back for the summer. It is something special,” said Kennedy

In his senior season, the leftie went 5-1 with a 0.88 ERA in 32 innings pitched while striking out 49 and walking only 13. He was named All-Region First Team and earned Winchester Star Baseball Player of the Year honors.

“I like to be quick and efficient on the mound. I like to do my job in whatever role they put me in. I just want to help the team in whatever way I can.”

For anyone who hasn’t seen Kennedy on the mound, he gave a short breakdown of what to expect.

Kennedy is a significant addition to a team with a scarce amount of left handed pitching. He will make an immediate impact once the summer season hits.

Royals fans should be extremely thrilled at the sight of these five promising players headed to the team. Their services will pay huge dividends, and they will be intimidating players upon developing with the talented coaching staff of the Royals organization.

Life on a Ball Bucket